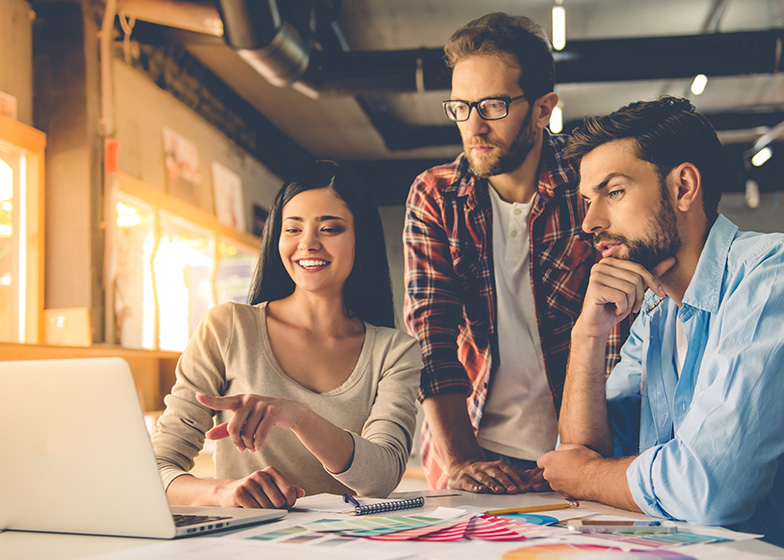 I get asked to create a lot of marketing videos, but more and more my clients do not want to use any video footage as content. There is a trend for shorter videos just using graphics and text to tell a story or market a product. Sometimes a client will come to me with a script or a PowerPoint presentation as a reference, but often this is not the case. Clients have a need for a Adobe Stock video but don’t often know how to express what they are looking for. My job as an art director is to help my clients visualize what they want.

An example of this was when I was working with the startup company, MyLudus, a tournament scheduling app developer in New Hampshire. When I first met with them, they had just moved into a small office and there was a lot of excitement in the air.  I met with investors, software developers, the sales manager, and marketing director. The apps that they were promoting were still being designed and coded, but they wanted marketing videos for each of their apps that would be posted later in the summer when they launched their website. So in the initial production meeting, they had very little to offer me. They had not written a script, and they certainly did not have any video footage for me to use. The idea of buying stock b-roll did come up, but there wasn’t a budget for that. So I started off the meeting by asking them what the main selling points of the apps were. I wrote all this down and would later begin to put it into script form. As far as graphic design goes, all they had was their logo, so we discussed using the palette from the logo, and a font that they were thinking of using on their webpage.

Then I went home and started to brainstorm and sketch out ideas. This is where I need to give a shout out to the Adobe Stock subscription. If you need to storyboard a video concept or animation quickly, it really is a terrific asset. In the Scheduling App Video seen below, I wanted to introduce the idea of a character (The Tournament Director) and with Adobe Stock I was able to find appropriate stock characters, icons for computers, clocks, desktops, and office spaces. All of this went into my first concept storyboard. Seeing the visuals in the storyboards gave my clients an opportunity to refine the messaging, and we worked together to write the narration and tweak the visuals. Once the storyboard was approved we were able to design our own characters and create a lot of original art. I hired an appropriate narrator, and I found music with the right tempo and attitude that I was looking for. In the end, they were very happy with the video, but it was certainly was not what they had in mind in our first meeting. By using Adobe Stock, I was able to present my ideas quickly and cheaply.

This is the finished Scheduling App Video below.

Another example was when I worked with Create3 to produce a video for Sumitomo SHI FW, a sustainable energy company in the US and Japan. Marji, from Create3, was able to get a script from the client, but when it came to content, all they had were some photos and a couple of low-resolution 3D animations. Though they provided all the photos that they wanted to use, many of the photos were in a low-resolution that was not going to work in an HD video. With a very tight deadline, I decided that spending a week on storyboards was not efficient or cost-effective, so I just dived into creating some animation samples in After Effects, which the client was happy with.

Because of the resolution restrictions, I was forced to display a  lot of the smaller photos in a grid layout, and when I could, I used the higher resolution photos full-frame and created slow moves on the photos to mimic the motion of video. However, as I started building the animation to the narration and music track, it became apparent that I didn’t have nearly the number of photos that I needed to fill the timeline. We asked the client to try to find higher resolution photos of what we had and hopefully get us some additional photos, but that never happened. Marji and I discussed selecting stock photos and getting them approved by the client, but with the short deadline, I decided that there wasn’t time for that. This again is when my Adobe Stock subscription, saved the day. With the Adobe subscription, you pay a monthly fee of $30 for 10 images. Additional images are only $2.99 each. The real power of the subscription though, is that what you don’t use gets carried over to the next month. So at the time of this project I had a backlog of over 50 images at my disposal, so I made the decision to download photos as I needed them to get me to the end of the timeline. Using stock photos also gave the video a more professional look. This worked out well, and once I was finished with the video, I sent a link to the client. I had informed the client that though, I didn’t have their approval to use the stock photos, it was at least a good way to view a rough cut of my completed video. My hope was that if they saw the finished animation, it would motivate them to search a little harder for the right photos, but to my surprise, they liked the video pretty much as I had created it, and only suggested that I replace a few of the photos, and edit some of the on-screen text.

Often times there isn’t time for the back and forth with a client to try to gather the right content. With Adobe Stock, I am able to follow my creative instincts and quickly present visuals for review.

Here is the finished Sumitomo video.

The Pridgeon Design Group is a motion graphics company with Studios in Boston and Sarasota.  Our producers are specialists  in corporate marketing videos.